The Fundamental Theory of Generator Protection

There are many abnormal conditions that can result in damage to the generator. Some of these conditions are a result of a failure within the generator or one of its subsystems and others originate in the power system itself. The following table summarizes the types of failures that can occur and the associated methods of protection.

The most commonly occurring failure of the stator winding is a break down of the insulation between a single phase and ground. Undetected, this fault can quickly damage the generator core. Fires are also possible on air-cooled machines. The ability of the stator differential element to detect a ground fault is a function of the available ground fault current. As such, dedicated ground fault protection is generally required for the stator.

Generators provide the energy used by all of the loads in the power system and much of the reactive power needed to supply the inductive elements thereby maintaining the system voltage at nominal values. Power systems have little capacity for energy storage. As such, lost generation must be immediately replaced or an equivalent amount of load must be shed. It is of primary importance that the protection system for the generator is highly secure during external disturbances.

The generator is one component of a complex system that includes a prime mover, an exciter, and various auxiliary systems. In addition to the detection of short circuits, the generator protection IED is therefore required to detect an array of abnormal conditions that could damage the generator or one of it’s subsystems. Generators can be classified into two major types: induction and synchronous. Induction machines are typically smaller in size, ranging down to as little as one hundred kVA, and are normally driven from a reciprocating engine. Synchronous machines range in size from several hundred kVA to 1200 MVA.

Synchronous generators may be driven by a variety of prime movers, including reciprocating engines, hydro turbines, combustion turbines, and large steam turbines. The type of turbine affects the design of the generator and can therefore impact protection requirements. The generator size and it’s method of grounding also affect its protection requirements. Small and medium sized machines are often directly connected to a distribution network (direct connected). In this configuration several machines can be connected to the same bus. Large machines are usually connected via a dedicated power transformer to the transmission network (unit connected).

A second power transformer at the generator terminals provides auxiliary power for the unit. Generators are grounded in order to control from damaging voltage transients and to facilitate the operation of protection functions. Direct-connected generators are often grounded through a low impedance that limits the ground fault current to 200-400 amps. Unit connected machines are typically grounded through a high impedance that limits the current to less than 20 amps.

For direct connected, low impedance grounded machines, a current-based detection method is used. This protection needs to be fast and sensitive for internal ground faults while at the same time secure during external disturbances. This can be achieved using a restricted ground fault element or a neutral directional element. The restricted ground fault element implemented in the G30 and G60 employs a symmetrical component restraint mechanism that provides a high degree of security during external faults with significant CT saturation.

Read: What are the Different Generator Cooling System in Power Plants

Phase faults not involving ground can occur at the winding end or within a slot on in machines having coils of the same phase in the same slot. Although a phase fault is less likely than a ground fault, the current resulting from this fault is not limited by the grounding impedance. As such it is critical that these faults be detected quickly so as to limit the damage to the machine. Since the system XOR ratio is particularly high at the generator, the stator differential element is particularly susceptible to CT saturation due to the DC component of the current during an external disturbance. The G60 stator differential algorithm adds additional security in the format of a directional check when CT saturation is suspected due to either the AC or DC components of the current.

The Figure below shows the permissible short-time loading limits of a generator according to C50.13-2004. Loading beyond these limits will quickly damage the machine. An overcurrent element with a very-inverse characteristic can be used to ensure that the generator is operated within permissible limits. GE IED’s are also equipped with RTD inputs. In addition to detection of overloading, RTDs can detect overheating due to a cooling system failure or localized overheating due to a failure of the insulation between the stator core laminations. 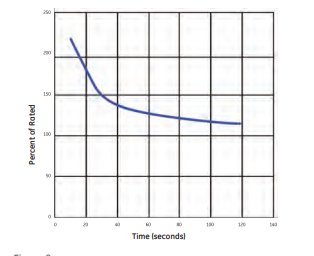 There are a variety of faults or disturbances for which the generator protection IED must operate. For each fault type there are generally a set of actions that are carried out. These include tripping the generator breaker, tripping the field breaker, transfer of the auxiliaries, and tripping the prime mover. For example, an overfluxing condition requires a trip of the generator and field breaker, a transfer initiation, but no trip to the prime mover. This allows the machine to be resynchronized if the problem is resolved quickly. Internal programmable logic allows the tripping logic to be easily implemented. Additionally there are instances where the generator powerhouse is at a substantial distance from the switchyard. Using peer-peer messaging, tripping and status signals can be sent directly from the relay over fiber to a controller such as a C30 located adjacent to the generator breaker