What is SELV and PELV Circuits?

Application and arrangements of SELV and PELV circuits

SELV - Safety (Separated) Extra-Low-Voltage
Extra-Low-Voltage system (i.e. normally not exceeding 50 V a.c. or 120 V ripple-free d.c.) which is electrically separated from earth and from other systems in such a way that a single fault cannot give rise to an electric shock. 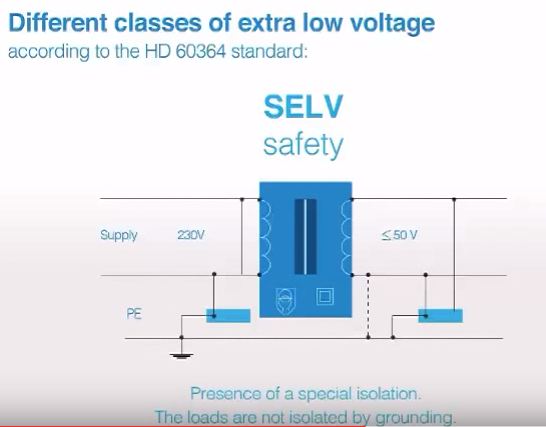 Protection by SELV is used in high risk situations where the operation of electrical equipment presents a serious hazard to safety. One typical location is Zone 0 in a pool zone which is in the water container itself. The nominal voltage for a pool light connected in zone 0 must not rise above 12V ac or 30V ripple free dc.

In this system there is NO return path for current via earth as protective earth conductors are NOT permitted to be installed on the secondary ELV side of the transformer.

Typical applications for SELV systems include: 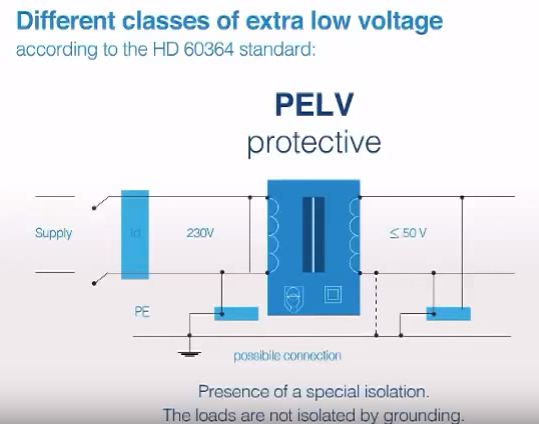 Protection by PELV is used where extra low voltage is required, but the risk of electric shock is much lower than what would be expected for a SELV wiring situation.

A PELV system may include the addition of circuit protection in the secondary conductors of the ELV circuit. Although a protective earth is not required on the secondary of a PELV transformer, one can be used should the connected equipment need it.

Typical applications for PELV systems include:

IEC Requirements for SELV and SELV when tested for insulation resistance

Installation Requirements
Where SELV is used, whatever the nominal voltage, protection against direct contact shall be provided by: