The change of the external connection of the motor from Star to Delta is normally achieved by what is commonly referred to as Star-Delta starter. This starter is simply a number of contactors (switches) that connect the different leads together to form the required transition from Star to Delta.

When the motor is started in the star connection, the phase voltage of the motor is reduced by a factor of √3. The reductions in starting current, starting power, and starting torques for a reduced Voltage can each be calculated by using equation 1 (This ignores other factors like saturation, etc.):

These starters are normally set to a specific starting sequence, mostly using a time setting to switch between Star and Delta. There can be extensive protection on these starters, monitoring the starting time, current, Voltage, motor speed etc. 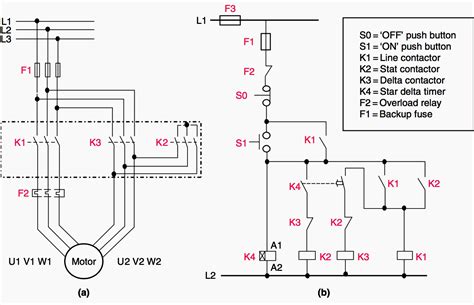 From the control circuit above, when switch S1 is pressed, there will be a complete path of electric current that will flow from L1 to L2 causing the following coils to be activated:

The auxiliary contact of contactor K1 is connected in parallel with the start button S1 (latched) so that the circuit will remain activated even when S1 goes back to the open position. Note that S1 is characterized by a pushbutton that will return to its original state after being pressed.

The normally closed contacts K3 and K2 are also interlocked to prevent activating STAR and DELTA connection at the same time that can cause serious damage to the motor.

What are the advantages of using Star Delta starting?