In modern architecture of power system automation, the redundant connections of hard wiring involving RTU, PLC, metering device and instrument transformers can be eliminated with the use of IED (Intelligent Electronic Device). To accomplish this objective, an electrical engineer need to know how to do the data modelling using IEC 61850.

Data modelling in IEC 61850 begins by considering a box that contain the following layers: 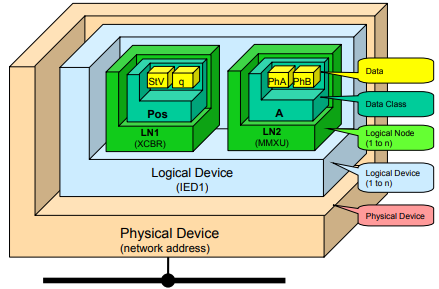 1. The first layer is the physical device that is connected directly to the network address.

2. The second layer is the logical device, the IED. Different manufacturers, has different of models of IED that can perform the combined function in substation automation i.e. metering, controlling, monitoring, protection and communication.
3. The third layer is the logical which can be considered as the abstract data objects and the main elements of the IEC 61850 object-oriented virtual model. This consists of standardized data and data attributes. IEC 61850 defines the ACSI, which creates objects and services independent of any protocols. This enables a hierarchical class model, in which all class information, services that operate on these classes, and associated parameters, can be accessed from a communication network.
There are 13 logical nodes available in IEC 61850.
4. The fourth layer is the data class. In this case, the 13 logical node groups is expanded to 86 data classes. 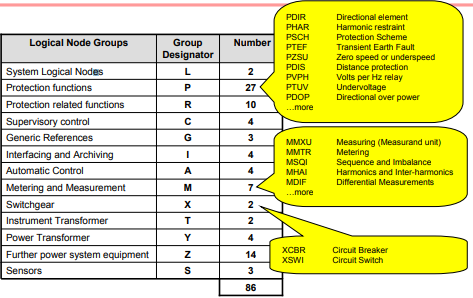 Each of the groups are further subdivided into Logical Nodes. There are 86 different types of Logical Nodes defined. Each of these are composed of data that represent some application specific meaning and are intended to provide separate sub-categories of data (poetic license with terminology applied here). For example, The Protection Function group comprises 27 different Logical Nodes, some of these are listed above. To map this to the real world, data from a protective relay with 21 and 51 elements would be mapped to PTOC and PDIS logical nodes respectively
5. The fifth layer is the data. The 86 types of data classes are further expanded to a total of 355 data. 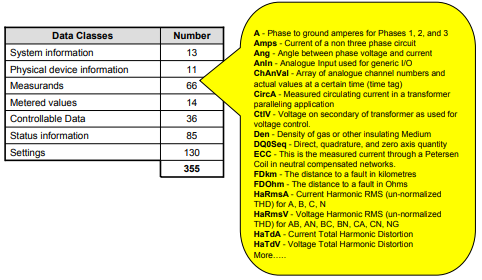 To access a data in a 61850 system is similar to accessing data across a common IT network infrastructure in Windows Explorer wherein the user will browse the network until the data source is located.
For example, a person is responsible for the HMI wish to animate a CB symbol on a one-line diagram:
The picture below shows a sample of data modelling. In this process, the physical device in the left (a simple feeder) which consist of one circuit breaker with CT and VT in the line. Accordingly, the 2 IED's in the right IED 1 and IED 2 can perform as shown. For example, in IED 1, the circuit breaker is modelled thru a logical node data class XCBR while in the same IED, there is also another device which is intended for measurement MMXU. The data classes contained in the IED's above can be combined to perform a certain function based on how the desired outcome (by the designer or programmer). 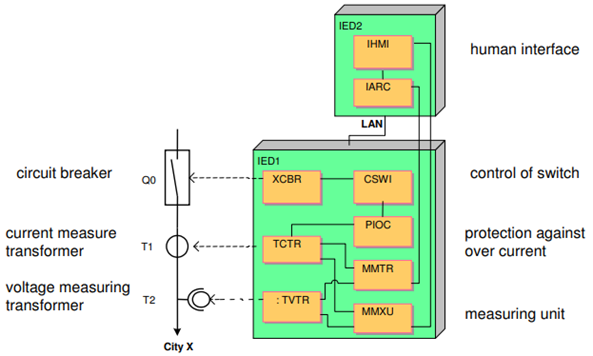 The diagram below shows more comprehensive details about the interpretation of the physical world to the virtual world involving logical nodes and data classes under IEC 61850. 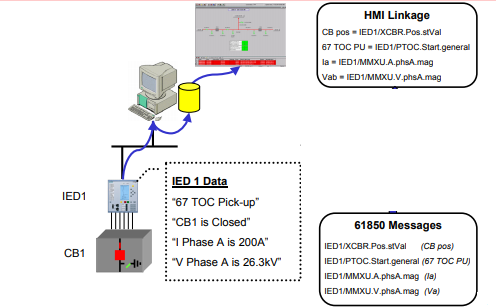