Earthing System According to BS 7671

Connection of the exposed conductive parts of an installation to the main earthing terminal of the installation.


What is earthing system?

Earthing system is an electrical system consisting of a single source of electrical energy and an installation. For certain purposes, of the Regulations, types of systems are identified as follows, depending upon the relationship of the source, and of exposed conductive parts of the installation, to Earth.

The main purpose of which is to ensure safety by making the potential of all conductive parts in the system is the same with ground (zero Volts). Thus during fault there will be disconnection of supply as fast as possible.

1. TN-S System
A system having separate neutral and protective conductors throughout the system.

2. TNC-S System
A system in which neutral and protective functions are combined in a single conductor in part of the system. 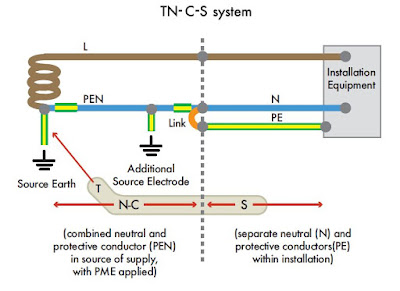 Technique for the protection of persons:
Operating technique: interruption for the first insulation fault

4. IT System
A system having no direct connection between live parts and Earth, the exposed conductive parts of the electrical installation are being earthed.

Characteristics:
Technique for the protection of persons: