Tags
Electrical Equipment
Energy Efficiency
Inverter technology in the air conditioning system is the ability to monitor and regulate the heat transfer by adjusting the speed of the compressor in accordance with the demand.According to DAIKEN a leading manufacturer of HVAC systems in Europe, inverter technology can be compared to the technology in the car "the harder you push the accelerator the faster you go". This innovation in air-conditioners was first introduce by Toshiba on 1981

Conventional air-conditioner units operate in either in maximum capacity or shut-off completely. A thermostat is installed in the system to regulate the room temperature. As a result the air-conditioning unit will periodically on and off the compressor thus frequent start-up of the unit is inevitable to meet the desired temperature. 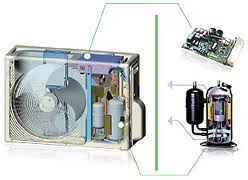 Construction of AC with inverter (photo courtesy: Toshiba)
The air-conditioning unit with inverter technology offers different kind of advantage. Practically the compressor has two main parts, the mechanical part (actual compressor) and the electrical part (motor that drives the compressor). Inverter technology modulates the later to control the speed of the motor that drives the mechanical part of the compressor. The affinity law of centrifugal loads says that the power is directly proportional to the cube of the speed the motor. This means when there are changes on the motor speed it could affect the power consumption of the motor.


Study shows that with the use of airconditioning unit with inverters the start and stop cycle are reduced into about 1/3 and saves energy consumption by an average rate of 30%. Moreover it also extend the life cycle of the airconditioning unit since the mechanical stress of frequent on and off are eliminated. While this type of air-conditioning is relatively expensive compare with the conventional one however it guarantee a return of investment for at least 2 to 3 years.

cars of the day such as the 1964 Thunderbird which it sure looked like it was copied after.central air conditioner cost

Hello! I need your advice about air conditioning. Can you recommend any company in Australia which are professionals in this area? Thanks for advice!

This is a brilliant blog! I'm very happy with the comments!.. have a peek at this web-site