How to Select Proper Type of Miniature Circuit Breakers MCBs 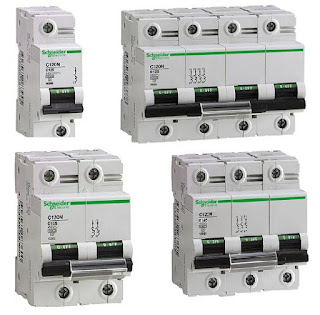 How to Select Proper Type of Miniature Circuit Breakers MCBs

Generally circuit breakers has several current ratings and each nomenclature must be identified properly to understand its characteristics.

In is the nominal current rating. This is the current that the device can carry, without disconnection and without reducing the expected life of the device.

Icn is the value of fault current above which there is a danger of the device exploding or, worse, welding the contacts together.

Ics is the value of fault current that the device can handle and remain serviceable.


MCBs generally have less prospective short-circuit current rating (ranging from 6kA up to 10kA) compare with other type of circuit breakers. And its overcurrent rating range ranges only from 6A up to 100A.

There are three common types of MCB: Type B, Type C and Type D. The difference between the devices is the value of current (Ia) at which the magnetic part of the device trips. The different types are selected to suit loads where particular inrush currents are expected.

Type B trips between three and five times the rated current (3 to 5 x In). This type is normally used for domestic circuits and small commercial applications where inrush current is non existent to cause it to trip.


For example, the magnetic tripping current in a 32 A Type B CB could be 160 A (Ia = 5 x In). These MCBs are used where maximum protection is required and therefore should be the choice for general socket-outlet applications.


Type C trips between five and ten times the rated current (5 to 10 x in). These MCBs are normally used for commercial applications where there are small to medium motors or fluorescent luminaires and where there is some inrush current that would cause the CB to trip.


Type D trips between ten and twenty times the rated current (10 to 20 x In). These MCBs are for specific industrial applications where there are large inrushes of current for industrial motors, x-ray units, welding equipment, etc.