Home Technical Topics What is the advantage of using Thermal Magnetic Circuit Breaker in motor control?

What is the advantage of using Thermal Magnetic Circuit Breaker in motor control? 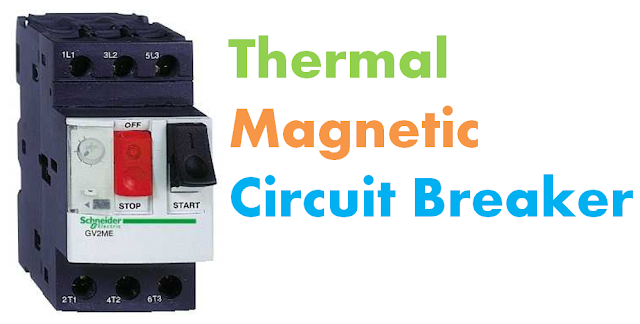 There are two commonly used methods of motor control system used in the industry. The conventional method is the 3-component system where circuit breaker, magnetic contactor and thermal overload relay are installed to control and protect the motor. However engineers and technicians found some problems coming out with this method. The problem is mainly due to incompatibility of the motor protection in the system.

The provision provided by NEC 430 can be accomplish based on the circuit described in figure 1 where the circuit breaker, magnetic contactor and thermal overload relay are installed to control and protect the motor. This method is called 3- component system.


While the three component system is the best way to follow NEC 430, one should realize the fact that in this case the thermal protection  and the magnetic protection are two separate units. As such it is vulnerable to mismatching of correct specification when either of the components are replaced. The worst effect when any of these components are mismatched is non-coordination of the protection devices.

In three component system, redundant or non-redundant does not really matter except one thing--- "coordination" of the protection system. Coordination means that during fault condition the upstream protection nearest to the fault should trip first among others. Although we can assume that in the beginning the engineers who designed the motor control circuit selected the proper ratings of the components based on exact calculation and code requirements. However there is a big possibility that the same shall not be followed during maintenance.

Replacing busted components with a specification different from the one that is being replaced is not a rare case in any industrial plants. This happen when there are technical troubles that needs immediate solution and there is no available spare that matches the exact specification of the above mentioned components. Or simply if the technician has no idea about the coordination of the protection system.

The solution is to adopt the use of 2-component system such as describe in Figure 2 where only Thermal Magnetic Circuit Breaker (TMCB) and contactor are used.

Based on Figure 2 the molded case circuit breaker is no longer in the motor starter because the Thermal Magnetic Circuit Breaker has built-in overload relay and magnetic trip mechanism compact in one unit. Meaning to say the vulnerability of mismatching of specification during replacement has been solved.

How to use Thermal Magnetic Circuit Breaker


Thermal Magnetic Circuit Breaker is capable of protecting the motor against overload and short circuit, viz:

Simply connect the magnetic contactor right after the TMCB as shown in Figure 3. The line current that will run through the magnetic contactor which came from the motor will also run through TMCB. So if there is fault downstream this unit will clear the fault just like what molded case circuit breaker do. And of course in sizing this unit for short circuit protection one should not forget to conduct coordination study with the upstream protection devices.

Thermal magnetic circuit breakers contain contact platform that is usually concealed and located in the lower part of the unit. Remove the cover and put the contact block inside the platform and you can already use it just like the conventional overload relay.

The advantage of this during maintenance is if we replace the protection of the motor, then we are replacing both thermal protection and magnetic protection since it comes out as a single unit. The risk of having non-coordinated protection devices due to human error or any other reasons is eliminated.

Hello! Thank you for this thorough information! I want to install thermal magnetic circuit breakers too, but I don't know what brand is better to choose. I have read that Schneider is quite qualitative.But when I was looking for its products here http://hardware.eu/schneider I couldn't find exactly thermal magnetic breakers. Do they produce it?

Hi! Here is a Great Blog You Might Find Interesting that Encourage me.We will, continue to do our best to improve our efforts on all fronts to better our standards to serve our clients and the society. معدات إنشائية